The great sin of our nation is racism. It has been with us since the beginning.  Think of the subjugation of Native Americans, an economy built on slavery and legalized segregation into the 1960’s.   Think of reoccurring waves of anti-immigrant sentiment in our nations history.

Racism is sometimes tamped down but always reemerges.  The latest manifestation was Charlottesville on Saturday as hundreds of white supremacists, ultra-nationalists and neo-Nazis strode through the streets of this small southern city.

That many carried Trump signs is concerning. That the President initially refused to specifically condemn the hate filled messages of the white supremacists is particularly alarming.  In response he offered a general condemnation of violence with an implication that the counter marchers were equally to blame.

Certainly people voted for Mr. Trump  for many reasons.  Many I’m sure condemn the message of those who marched with torches held high.

But what is apparent to me and many others is that Mr. Trump in his run up to the election and as president, has  played to a racist portion of his base.  He has regularly played the fear card:  ‘Mexicans crossing the border are murderers and rapists’….’Muslims are Islamic extremists’…’the undocumented are raising the crime rate and must be deported’….’Obama was not born in America’….and the list goes on.

In the midst of a society that is racially and ethnically more diverse and with a shifting economy that leaves more people behind, Mr. Trump has chosen the time-honored path of a demagogue… division and fear.   Division is easier than finding a positive way forward as a united people.

The crowd that marched through Charlottesville, for the most part were outsiders to that community.  They marched through this progressive college town with a message of hate.  Carrying torches they reminded us of the KKK in the days of Jim Crow.   They shouted ‘blood and soil’ as they marched, a fascist slogan of the Nazis in pre-World War II Germany.

President Trump’s response was muted and muddy.  He chose not to condemn those who helped him get elected.

It’s been said: ‘You can’t dance with the devil and not be tainted’.

In the Bible we hear:  ‘What good is it to gain the whole world but forfeit your soul?’ (Mark 8:36).  Mr. Trump has made his choice as to what kind of man and leader he will be.  He has chosen to align himself with those who promote bigotry and division.

The choice is ours.  Who will we dance with? What kind of America do we believe in and seek to be?  Being silent or complacent is a choice with consequences too.  Who will you stand with?

On Sunday evening I gathered with approx. 200 of my neighbors.  We were brought together by a woman named Jena Beers who decided to act. Jena was horrified by the images of violence in Charlottesville.  Her heart broke as she saw a racist drive his car into a crowd of peaceful marchers, killing a young woman and injuring many more.   She decided to act. 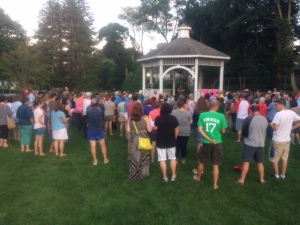 On Sunday morning via social media she invited her community to gather that very evening,  to say no to hate and yes to love, no to racism and yes to diversity.   200 plus neighbors gathered to speak to the best part of who we are as a people. Hundreds of such groups took place in villages, towns and cities across our nation.

President Lincoln said it is incumbent upon each generation to ‘become a more perfect Union’.  Our time has come.  Who will you dance with?  What message will you add your voice to?  Who will you stand and march with?

3 thoughts on “Dancing with the Devil”