We lament the loss of civility in our culture.   Our current political season offers many examples but is not an outlier.  In the early days of our nation John Adams and Thomas Jefferson were locked in a particularly nasty campaign for president.  Jefferson questioned Adams sanity and Adams raised a rumor of Jefferson fathering illegitimate children.

If mudslinging is part of our political and social psyche it isn’t the entire story.  A few days ago we remembered the 15th anniversary of the terrorist attack on September 11th.  We remembered our collective trauma in seeing so many innocent people murdered.  We remembered too the beauty that arose from the ashes,  as strangers and neighbors across this country reached out to one another with countless acts of kindness.

Cindy McGinty lost her husband on that day.  In the years that followed Cindy says: “My community loved me back to my feet. I think of the neighbor who mowed my lawn for eight years. The taxi driver who took me on countless errands and refused to take my money.”

We think of Jo Jo Esposito the Staten Island fireman whose battalion lost half of its members on 9/11 .  He’s become a surrogate father to the children of several firefighters, including his own family members who died that day.  ‘There’s no manual that prepares you for this”, he said, “you simply try your best to do the right thing.”  Over the course of 15 years this surrogate dad has walked brides down the aisle and attended graduations and birthday parties.   He did it out of love for his friends.

On the anniversary of 9/11 we remember the trauma and all that was lost.  We remember too how it also brought out the best in us. 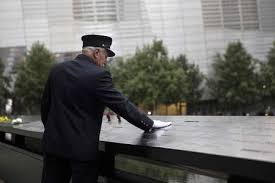 During this uncivil political season it serves us well to remember the positive lessons from 9/11. The antidote to fear and coarseness is simple kindness.  The reminder that we are all in this together.  That our strength as a nation is in the quality and depth of our character, our  capacity to take care of each other.