Here’s a provocative quote by the Franciscan monk, Richard Rohr: 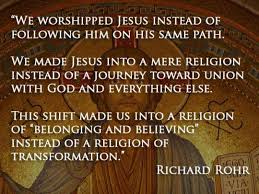 Rohr challenges the tendency of the Christian church to domesticate the story and witness of Jesus. Some would say its been all downhill since 300 AD when Emperor Constantine had his battlefield conversion to Christ. With that conversion he merged the trappings of empire with the Christian story. Thus began a cyclical process of each generation coopting the way of Jesus to meet their own needs.

We see this with today’s Prosperity Gospel movement which teaches that God desires to bless us with material wealth and happiness. Joel Osteen the pastor of a mega church in Texas, marries this promise of personal wealth, health and happiness with the veneer of being a Christ follower.

In this presidential primary we see politician’s using their faith to support a political agenda. We have so called Christians calling for the mass deportation of 11 million undocumented immigrants in the United States and ‘carpet bombing’ entire cities in Syria to root out terrorists.

Reading the story and teachings of Jesus in the Gospels, we see that his words stand in stark contrast to this tendency to domesticate. And of course, for people like me, who pastor churches it is also clear that I/we too contribute to this process of domestication. More times than I care to think about, I/we too have pulled away from the radical nature of Jesus’ teachings.

‘To walk in the way of Jesus’ says Richard Rohr, ‘is to enter upon a journey of transformation’. Transformation not only of me as a person but a call for the church to be a vehicle for transforming society.

This path of transformation as lived and taught by Jesus is a journey of servant-hood towards those on the margins, forgotten, oppressed. It’s about giving up control and allowing the way of Jesus to guide our path regardless of the costly places it takes us. The way of Jesus is the antithesis of the ‘prosperity gospel’ and politicians who would condemn or cast out. The antithesis of liberals who want to pick and choose when and where to get involved.

Says Rohr: ‘We made Jesus into a mere Religion instead of a journey toward union with God and everything else.’ It isn’t rocket science to understand the way of Jesus…but it also isn’t easy. Pope Francis understands this temptation to domesticate. On his recent trip to Mexico he challenged bishops and politicians to repent from their worship of power and privilege. He calls each of us to recommit to this paradoxical journey, ‘where the last will be first’ and ‘the humble servant becomes great’.