Holy Week in the Christian tradition invites us to suspend our rational sense of what is and isn’t possible.  Like the Disciples witnessing Jesus’ crucifixion, we are asked to believe that death will not have the final word.  To believe that the terrible might of the Roman Empire has not won. 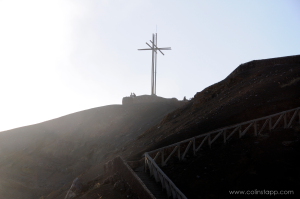 With Peter, John, Mary Magdalene at the empty tomb, we are asked to consider a new narrative that Jesus has overcome the grave.   That the life-force in Jesus can not be contained.   Theologian Marcus Borg writes:  “Something happened that first Easter, that sent a group of fearful disciples, out into the street with the news that Christ was not dead, but alive.  Something happened on that first Easter that transcended their fear and despair.”

This ‘something’ is that of God which cannot be measured, quantified or contained.  It refers to a mystical, subjective experience which is real to the one affected.   For those without such an experience, it can be hard to believe.

The author Barbara Ehrenreich, is a well-known atheist.  In her new book , Living With a Wild God, she writes of a mystical experience when she was 17:

“This experience shook my safely rationalist worldview and left me with a lifelong puzzle.  In 1959 I stepped out alone, walked into the streets of Lone Pine, California and saw the world – the mountains, the sky, the low scattered buildings – suddenly flame into life.  It was a furious encounter with a living substance that was coming at me through all things at once, too vast and violent to hold on to, too heart breakingly beautiful to let go of.”

For years Ehrenreich tried to rationalize her experience away.  She doesn’t believe in God or gods.  Yet all these years later, she can’t  let go of wondering what it meant and the source from which this vision came.

In Celtic theology, the Celts (both pre and post Christian), believe that there is a thin place, a permeable membrane which separates our conscious world from that of the super-natural, the spiritual, the mystical.   That in the ‘thin place’ we are able to catch a glimpse of that source, that ‘something’ which serves as the essence, the life- force for all that is.

2000 years later that same life-force continues to confound us.  To challenge our carefully structured sense of what is and isn’t possible.  We are invited to consider the  possibility that something extraordinary happened on that first Easter, in those moments between darkness and dawn.

Could it be that there is something more going on than we can easily contain and measure?