In the classic film ‘Field of Dreams’ starring Kevin Costner, his character, Ray,  is directed by a mysterious voice to plow his Iowa cornfield and build a baseball field.  The voice promises ‘build it and he will come’.   As the movie unfolds we learn that the baseball field is to welcome the spirit of Ray’s long deceased father.  It seems that during Ray’s turbulent adolescence that baseball was the one place where father and son could meet.

Through the magic of film, Ray’s father appears and father and son are able to have one last game of ‘catch’.   As the ball is tossed back and forth, old regrets fall away and the relationship between the two is restored.  Who among us doesn’t wish for such a place of meeting, healing, restoration?

There is a Field of Dreams near where I live in Oregon.  The field is on the grounds of a Trappist Abbey built by a monk named Brother Mark.  The ball field honors his relationship with his 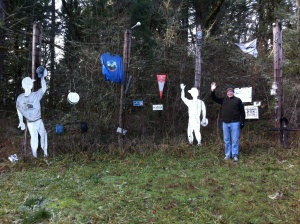 long dead father.  As with the character in the film, baseball was a meeting place for a son and father who didn’t always know how to communicate.

For Brother Mark, the building of this rustic field with its chicken wire backstop was a labor of love to honor his Dad.  He also built it to be a place where others could come to honor loved one’s no longer living yet who live on in the lives they touched.  People now come with baseball related mementos to place on that chicken wire backstop.  Attached to the backstop are pennants, team jerseys, rosary beads.

In 2000 my Dad, Raymond ‘Norman’ Harrop died.  I asked Brother Mark if he would walk with me to the field.  At the field I took off my Red Sox cap and tucked it into the chicken wire backstop.  My Dad loved the Red Sox and so do I.  Brother Mark offered a simple prayer of blessing upon my Dad’s memory and asked that this Field of Dreams be a place of healing for me.

Over the years I’ve often returned to Brother Mark’s field, and a few times have brought a new Red Sox cap to replace the one which had grown faded by the elements.  One time I noticed that a Yankee cap had been placed next to my Dad’s, and I thought, “is this what heaven is like?”

On New Years day, I walked with my daughter Lindsay to the field.  We noticed that it was time for a new hat to be placed.  It was a crisp, peaceful, sunny day.  Other memorabilia honoring fans of the Mariners, Dodgers, Cubs adorned the backstop.  Each placed with a prayer.  Each seeking a blessing.

At this Field of Dreams, I breathed a prayer:  “I love you Dad.  I miss you.  Thanks for all you did for me and our family.  Go Sox”.